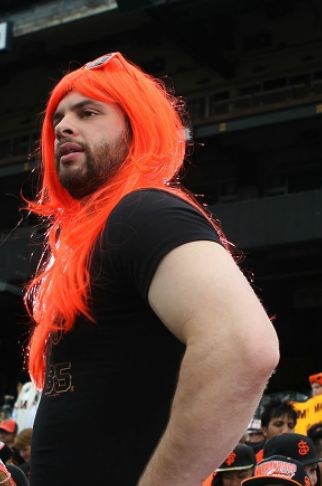 This is my “comment” on Brandon’s post.  I have a lot to say and fortunately for me this is my blog so I can go on and on and on…

I love that you and Brandon Crawford are doing the Brandon’s blog it is my all time favorite Giants read always enjoyable!  You always mix it up and that keeps it interesting and real. Thank you for that.

I am so proud of the role model you are, not only for the children but for everybody. You are a good person with good values.  Your love and respect for your wife, family and friends is admirable and it shows.  I hold the Giants in high regard and thank you for proving that the players that make up the team I adore ARE better than the rest.

Am I surprised that the way to your heart is through salad dressing?  Absolutely not!

I must admit that I thought the alarm story was leading up to “oops wrong house” but not disappointed.

I am still amused at the image of you in Yoga pants but I think your teammates were having more fun with you attending then you were and I doubt if your busy schedule would allow for regular classes.  Haley may want you to take class with her over the off-season and you don’t want to be too advanced.

I am sorry that some make you feel as though you are just a “baseball machine” that isn’t a mistake I make but I have been a fan for 56 yrs. and I regard the players as people first ballplayer’s second-and I take plenty of flak about it.  I love this team like a mother and I am old enough to do so.

My thoughts get no respect most don’t agree with me when I preach unprofessional things such as “They can’t win if they aren’t having fun”  “There is something bothering him, I can tell by his face”  “Not just anyone can be a Giant the guy has to ‘click’ with the team”  “If you say slump he will hear that and it will get in his head and THEN we have a slump!”  It just so happens that some who know, Alex Pavlovic,  for example, that agree with me and I would show the articles to prove it if anyone cared.  I get a kick out of being the Rodney Dangerfield of MLB.

The San Francisco Giants are my boys.  I raised them from pups.

You were one of my first posts on my blog due to the attention you paid to the fans in Scottsdale spring of 2012. I had the orange beard shirt on and even though I am not usually an autograph hound I was really hoping to have Wilson sign it. Well, that wasn’t going to happen as I watched Bri Bri run to his car and then burn rubber out of the parking lot and away from his fans.

So…Now he has to be a Dodger which can’t be pleasant-even though I wouldn’t normally wish that on anybody-maybe he should have been nicer.  He can act all he wants to but he’s not happy as a rival of the team that made him…whatever it is he has become.

You on the other hand you came and heaped love on us adoring fans before you left the stadium lot.

When I told you I wasn’t able to get Brian to sign you said something like, “shame on him” at least that’s the way I remember it. You then signed the shirt right in the middle of what would have been Wilson’s face inspiring the blog “Belt gets in Wilson’s Face” and with that gesture you won my undying loyalty and became my favorite  player.

You signed and posed for pictures for everybody which I am certain took a chunk out of your personal time.  (Thank  Haley for sharing your time.) The only regret I have about that day is that I took pics of you and many other fans with their cameras but failed to get one of my own.  I was so thrilled for the others it took me a while to realized that “Hey, I would like my picture with Brandon Belt too!”  But it was too late you were making your exit and not wanting to take up any more of your time, I didn’t ask.  I will be sitting right by the visitors dugout at Chase 4/2 and 4/3 of the opening series-hint hint. 🙂

I am used to losing players that I am seriously attached to-after all guys come and go-however for the first time since the team came to San Francisco there were players I simply refused to say “byebye”  to.

I worried that if you and Timmy were “let go” that my unconditional love for my team may be tested.  I’m not totally unreasonable and I usually adjust to whatever decisions are made but this time I just wasn’t feeling flexible.

Thankfully that did not happen I  breathe and bleed (orange) easily for another season.

I am at Scottsdale Stadium every February watching you & the other guys work out and practice.  This is what I love to do most of all and I wait not so patiently for spring to arrive so that I can spend my birthday with my team.

I don’t need the commercials to show me your humorous side (hands down your gamer babe is the funniest commercial) however you did clear one thing up-thankfully-I thought you were mad at me!

I was relieved to see you practicing in Scottsdale but my joy was dampened in the glare of the “stink eye” you were giving me.  I tried to relax but was  wracking my brain-“What could I possibly have done to make Belt so mad?  Actually I’m sure there are plenty of things I could have done but now way never, not intentionally. Turns out you weren’t mad at all.  Silly me!

Actually my foremost thought as I watched you this spring was “I swear that boy has grown another  foot!”  I speak of your height and not any extra appendages.  Hmmm?  Nope I would have noticed.

Your appearance doesn’t read “angry” to me it reads concentration and tells me that you take your job very seriously.  Important trait one I admire.

I occasionally take in a pre-season game but I prefer the more intimate crowd and the relaxed demeanor of the practice sessions.  Dealing with the crowds is something I am willing to do only for regular season games.   I watch you more closely than most of the others because as I said, you are my fav also you play 1st base  and I practically have my feet on the bag.

I don’t think you are a germaphobe.  It is true that we get sick from other’s germs but I hate for Charlies child to get the blame. He too made a very good impression that spring of 2012 and inspired a blog post. I wish he was still with the team. I hate that you have been sick and I hope you are feeling better and continue to be well.  I hope you don’t get paranoid about interacting with the fans, it sets you apart & it is important.

Not all fans are “cray cray” some of us are adults and have respect for your personal time and space.  It would be nice if as a mature lifelong fan I would not be lumped in with the “Prom?” crowd but that is a dream.  After  all my first spring training in 1986 I could walk anywhere, watch everyone, talk to any player.  Willy Mays standing next to me asked me if I would like his autograph, naturally I cherish that day.  I didn’t try to hug him though and  I would never ask you for a hug HOWEVER I am still hoping to get that picture. 🙂

I thought spring training was just for my baseball stuff. Apparently it’s spring training for my living arrangements, too. When we got into San Francisco Wednesday night, I drove to the house Haylee and I rented in the East Bay. The lady we’re renting from told me how to work the alarm system. I had it all written down.

Then the police showed up. I was telling them I was doing the exact thing the landlord told me. I have an alarm system at my own house, so I know how they work.

It kept ringing and soon 30 minutes had passed. It’s after 10 by this point. I decided just to leave…