Saturday night after the Giants took a brutal loss to the St. Louis Cardinals my heart broke.  I wasn’t feeling that way because we lost the game at home after an extravagant presentation of the World Series Rings. A celebration that glorified our Championship team and reduced them all too excited, childlike creatures.

It was when I saw two of our young players in tears I realized what was happening and it broke my heart.

Brandon Belt was shown no mercy forced to do a post game interview while he was in tears. Apparently partly over his performance and I am certain a little over the entire team’s performance. 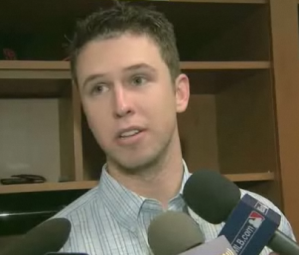 Buster Posey with obvious signs that he too had been crying also had to withstand an interview when that I am sure was the last thing he wanted to do.

Or could it be that feeling of “let down” that we all get after we have been part of something so fabulously exciting that it feels unreal.

There has been a great deal of hoopla, speculation and celebration since last November when this group of talented individuals became World Series Champions and started on a ride that they would never forget.

Unfortunately the come down was pretty intense. Plagued by injuries and uncertainty the San Francisco Giants have not been playing like champions at all. Some of the games seem almost “Bad New Bear-ish” but it’s not the end of the world.

I want to remind everyone that it is called a “baseball GAME” and thus it should be fun. However I am all to aware that this is professional baseball and that makes it a bit less than just a game to those who make a living at it.

But when I see the effect of the pressure some of these young men feel it takes me back to the days when it was my own boys that took the game so seriously that I had to preach things such as “it is just a game” or “you pitched great even though you didn’t get the win” sometimes “even Barry Bonds strikes out” anything to keep the sportsmanship intact.

Poor Brandon Belt I wouldn’t want to be in his shoes for any amount of money or fame. He was under so much pressure from the start that I’m kind of surprised we didn’t show signs earlier.

Of course after that they get all messed up again! But we don’t have to think about that right now.

But this is how the SF Giants play ball! Always has been, always will be.

Now look there, Mark Fontinuo just got his first hit of the year.

Now just about anything can happen.
GO GIANTS!